Results pertaining to the germination percentage of pre-soaked seeds in a series of temperature regimes viz., 100C, 150C, 200C and 250C have revealed significant increase among seed sources in each of the three conifer species of Garhwal Himalaya. Soaking of the seeds for 24 hours in GA3 solution had shown maximum germination in A. pindrow (45.0±4.19%), C. torulosa (57.0±3.40%) and P. smithiana (56±6.01%) as compared to untreated (control) seeds. It has also been observed that GA3 treatment caused an appreciable shortening of the germination period by 10 days. Therefore, seeds of these commercially important tree species should be pre-treated particularly with GA3 for 24 hours for getting enhanced germination. It is important to point out here that the seeds of each of the three species reflect poor germination in nature due to snow cover, seed decay, prevalence of excess water and lack of maintenance, however, because of increasing demand for large quantities of tree seeds for reforestation programmes, pre-sowing treatments are useful to improve the rate and percentage of germination.
Key words:Germination percentage, Gibberellic acid, Conifers species, Himalaya, Germination value
Introduction

Genetic variation is manifested through provenance tests, designed to assess the degree and pattern of variation across species ranges. The typical experimental approach consists of collecting open-pollinated seeds in a single season, from trees within portions of the range and evaluating the performance of the resulting seedlings in formal "common garden test" at several locations within the range. Frequently as a first investigative step, the germination characteristics of these seeds are evaluated under conditions, which allow comparison of geographical provenances, or families within provenance. Provenance differences are sometimes assumed to have a genetic basis. However, such tests are actually based on the phenotypic variations among seed lots from provenances, and not on genetic variation. Rowe (1964), and Baskin & Baskin (1973) have noted, that the difference in seed characteristics of ecologically important provenances may also be due to genetic variability.
The primary consideration in bringing out genetic improvement in a particular species is the development of a sound scientific breeding programme, based upon the available genetic variability. However, progress in improvement in many species has been poor due to failure in utilising the existing variability in tree improvement. The success of tree breeding programmes relies mostly on the ability to identify and deploy superior trees. Decisions on how, when, and what to select, are made (or should be made) taking into account genetic and economic information. Selection in tree breeding programmes, therefore should be based upon genetic information generated from progeny tests. Plant growth substances are involved in seed germination and subsequent growth; their specific roles are still obscure. In order to have a better understanding of the functions of plant growth, subsequent during these processes, it is important to identify and quantify them through imbibitions, from growth of the seedlings. Gibberellic acid (GA3) has been shown to promote germination of seed (Vogt, (1970); Krishnamurthy, (1973); Chandra & Chauhan, (1976)) however, the germination percent increased in the seeds of Nothofagus obliqua, when they were pre-chilled after soaking in GA3 Solution for 24 hours (Shafiq, 1980). Singh (1973) reported that spruce seeds germinated comparatively more profusely than silver fir, and further recorded that enough seeds become available for raising sufficient planting stock. Keeping this in view the present study was aimed at understanding the role of GA3 treatment for seed germination in different provenances of Abies pindrow, Cupressus torulosa and Picea smithiana.

The present study was undertaken in five provenances each of three important coniferous species (15 provenances) i.e., Abies pindrow, Cupressus torulosa and Picea smithiana from three districts viz. , Pauri, Tehri and Chamoli of Garhwal Himalaya. The details of the study areas have been presented in Table-1. 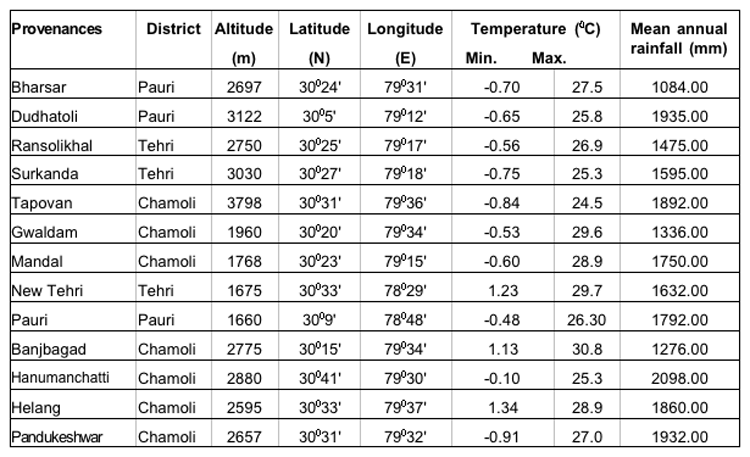 Table 1: Geographical and meteorological descriptions of the seed sources of A. pindrow, C. torulosa and P. smithiana.
The studies pertaining to provenance variation and seed germination after pre-soaking treatment were carried out under laboratory conditions at various temperatures viz. , 100C, 150C, 200C and 250C, inside a seed germinator (Model No. 8LT-SGL CALTAN). The seeds of all the provenances of each species were germinated at similar temperatures after applying following treatment to each set:
Treatment 1- Soaking of the seeds in distilled water at room temperature (250C) for 24 hours (as control). Treatment 2 -Soaking of the seeds in Gibberellic acid (GA3 100ppm) at room temperature for 24 hour (treatment).
For germination, the seeds in five replicates of 100 seeds each were placed in Petri dishes containing two filter papers, kept in the germinator, and maintained at desired temperature. Observations were recorded daily for germinated /non-germinated seeds up to 21 days. Radical emergence was taken as the criteria for germinability. The germinated seeds after cessation of the experiment were transplanted to the polythene bags in the nursery.
The data on seed germination was recorded and quantified in terms of percent germination and germination value. Percent germination was the value of seeds germinated at the completion of the germination period, whereas, germination value is an index, combining speed and completeness of germination; which according to Czabator (1962) can be expressed as: GV= PV X MDG, where, GV is germination value, PV is the peak value of germination, and MDG is mean daily germination.

Statistical Analysis:
The statistical analysis of each parameter was carried out on mean values and the analysis of variance (ANOVA) was performed using SPSS package. The critical difference (CD) was calculated as: CD = SEd X t0.01, where, SEd is the standard error of differences calculated as SEd = 2Me/2 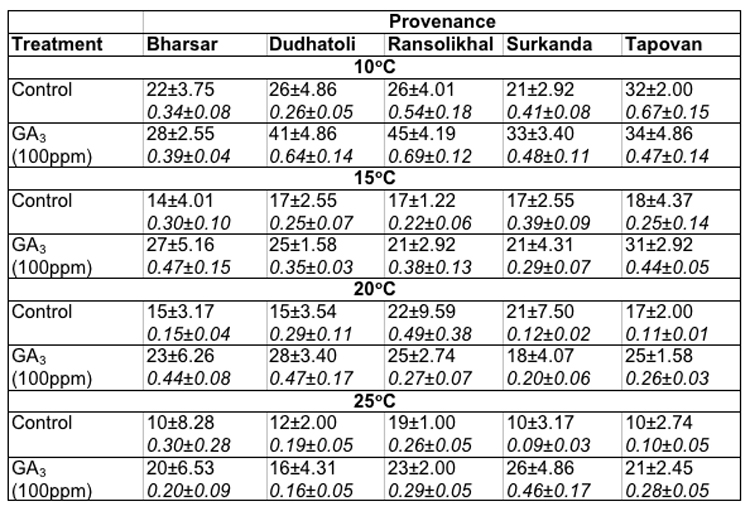 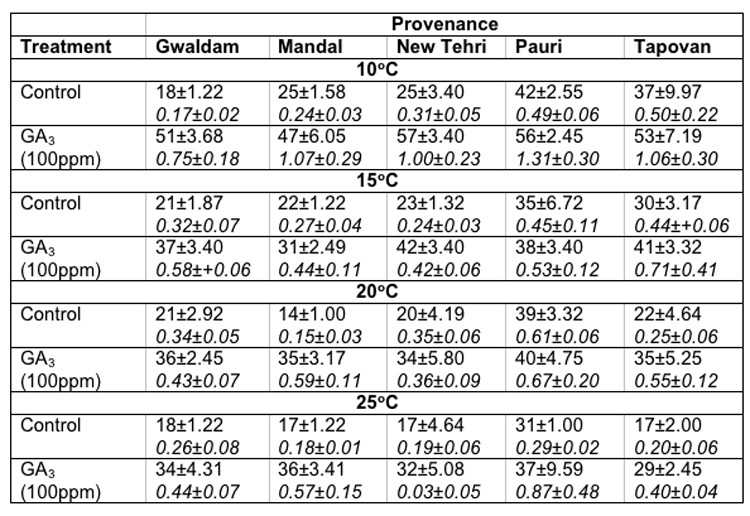 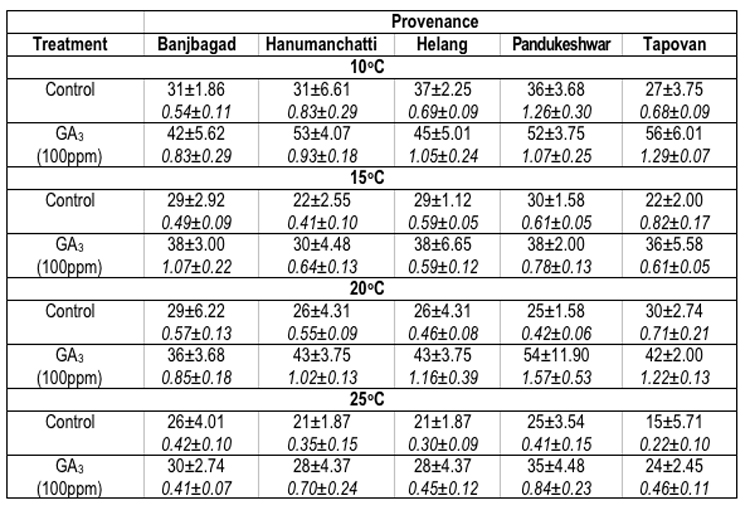 Table 4 : Effect of treatment and temperature on seed germination and germination value of different provenances of Picea smithiana. 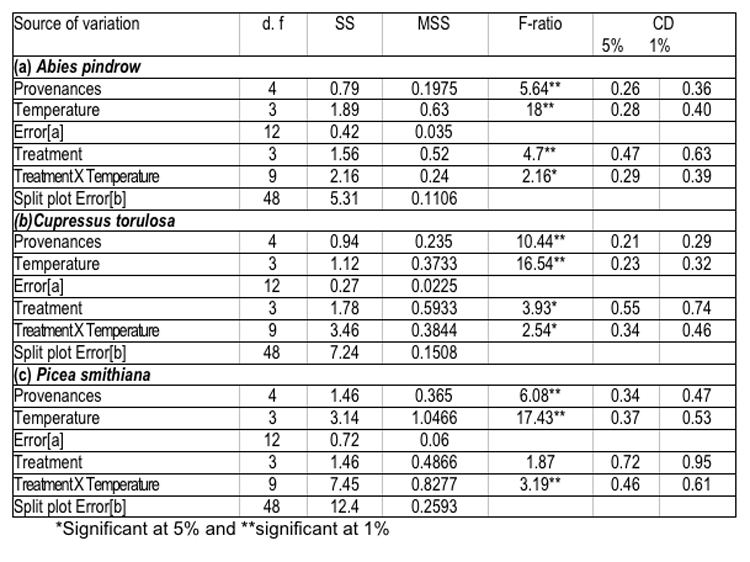 Table 5 : Analysis of variance for germination percent of various provenances of (a) Abies pindrow, (b) Cupressus torulosa and (c) Picea smithiana.
References